As we walked away from the small plot of earth where a new school will be built over the coming months, I stopped and turned around to take in the view. Everything seemed miniature: the village behind me, the small causeway leading to the site, the orchard of young guava trees beyond, a storybook loaf of piled-up hay, and a squat bamboo storage shed. All was damp, dark, quiet, and insulated by foliage from the dusty chaos of the village road.

A single shaft of sunlight was breaking through the dense canopy of mango leaves above. It shot down to where two calves were busily munching on a fresh helping of water hyacinth that had been piled in their trough from the nearby slough. The stems, a tangle of shiny wet tubes, were a brilliant green in the natural spotlight. The black-on-white of the contented calves was brilliant too. Nudged by that sunbeam, I suddenly wanted to linger, to be welcome, to watch life grow out of this latent corner of the earth. This is what a small measure of light can do in a dark place.

Back around the bend in the village is another miniature dark place: the school building currently being used by this Hindu cobbler community in Sonargaon. Building, of course, feels like an overstatement--this building is a four by six-meter tin shed. The only light is what comes through the door, two small windows, and the gaps under the eaves. But now there's another small source of amplified natural light. It's simple and sustainable, requiring only the sun's light to make it work. It's a two-liter Coke bottle filled with water poking through the tin roof. Even on this hazy day, it's adding light to the dark school. On a sunny day it may well brighten most of the space. Right now, though, it's difficult to tell how much real difference it makes.

It's difficult to tell. That's the tricky part about trying to do something worth doing in this world. How can we know that a "real difference" is being made? How does change actually occur?

The desire to create change was certainly there on that day, as bright as any light can be. We were a potpourri of humanitarian intention: The Greenies, an environmental student group from International School of Dhaka (led by our own Bangla-Dasher, Chris Hesse), a Dhaka-based group called Change working in cooperation with A Liter of Light, and, of course, Shahed of the Shubornogram Foundation who is moving this school project forward with the help of the Bangla-Dash. We even installed a "Tippy Tap", an innovative hand-washing station promoted in Bangladesh by Helen Keller International. It's an impressive list of groups who care about improving the lives of people in Bangladesh and around the world. And most of them have very nice websites.

But for all that intention, what was actually accomplished "on the ground" that day?

-We spent about 6 hours enduring the chaos of Dhaka roads to go to a village that is only 33 kilometers away.
-We distributed sports equipment (that will likely disappear very soon) and school supplies. -Our visit and gifts brought a lot of smiles and excitement that may linger in the village kids' memories.
-We installed a light fixture that provides a negligible amount of light.
-We installed a hand-washing station next to the village well (making it arguably redundant) only to find that its most critical components, the plastic jug and the bar of soap, were already missing by the time we left, apparently confiscated by a villager who felt there were more important uses for such items.
-We helped the children from the school use the bar of soap to wash their hands before it disappeared.


With such a list, one cannot help but wonder if we really helped anyone in the village that day. But instead of succumbing to my more cynical instincts, I will answer with a resounding YES. But it was probably not the lives of the village residents that were changed. Instead, it was in the lives of the visitors where a difference was made.

I'll explain by offering this more hopeful--and probably more realistic--version of what usually is accomplished on a trip like this:


-You go with the assumption that you will be helping the developing world.
-You are moved by the contrast between "your world" and "their world".
-You realize it's not actually possible to have two worlds in our one world.
-You let that realization evolve--perhaps subconsciously--into a more empathetic worldview.
-You then spend the rest of your life making instinctive decisions that are an outgrowth of this new way of thinking.
-With your influence on others, the amount of people like you increases.
-The world gradually shifts from its current unbalanced state to one where those who have too much have less, those who have too little have more, and everyone basically has what they need to live a healthy, happy life.


What does this look like in practical terms for the wealthy, educated, good-looking, conscientious, kind-hearted students who sat through 6 hours of the worst traffic in the world in hopes of "helping" some underprivileged village children?

It means they don't become the new generation of businessmen and women who get rich by exploiting the poor; they don't become politicians who care more about getting reelected than improving the lives of their fellow citizens; they don't live a life that prioritizes material gain and leads to over-consumption. Instead, they instinctively care about people and our shared planet, and they live their lives accordingly. 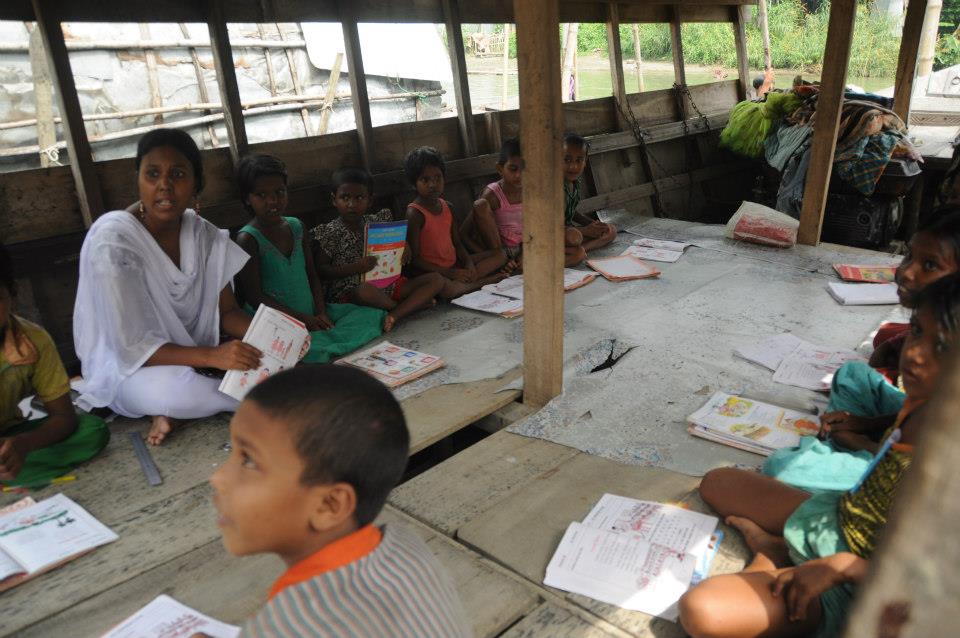 Before we installed the light in the cobbler community school, we visited the floating school of a marginalized river gypsy community. The boat-school is not very big, but it has its advantages; namely, providing a haven from the discrimination the students face on land, and, as one of the boys nonchalantly exhibited, being able to  step up onto the back deck and pee straight into the river. (I can just imagine the time that could be saved if I let my students open up my classroom windows, do their business, then get straight back to their essay writing.) So keeping the river clean may not be in the curriculum right now, but as Nafis Jalil (grade 12 "Greenie" and initiator of the light installation) noticed, they've got some things down pat--like being excited for school and getting up on time in the morning. It's a non-issue because they wake up with the sun. While presenting a gift of school supplies, he wanted to make sure his fellow ISD students were aware of this. So he asked the boat-school students, "...and, kids, is it hard to get up in the morning?" "Of course not!" they apparently answered. Nafis told me later that the only reason he asked them this was to prick the consciences of his schoolmates who find it difficult to get to school on time.


Indeed, consciences have probably been pricked in many ways. At the very least, smiles were exchanged and the beauty of human interaction was reaffirmed. Most significantly, small lights were turned on that day in the hearts and minds of several young people. They are lights that when turned on reveal that we're all in the same room. They illuminate our shared existence on this planet and they are difficult to put out. They might be miniature for the present, but the darkness of unawareness has been pushed back--and that will eventually make all the difference.
Posted by Wearing a Man-Skirt (for now) at 3:42 AM